See it to believe it - a Vaughan Chopper Pump in action speaks for itself. Follow the link below, sit back, and enjoy!

Computational Fluid Dynamics (CFD) is a form of fluid mechanics that uses numerical methods and algorithms to solve and analyse problems involving fluid flow, the techniques of which are similar to finite element stress analysis. Essentially, fluid volumes are broken down into hundreds of thousands of volume elements to be analysed. The final results can then be plotted in various formats as described below.

The CFD modelling software used at Vaughan Co. for analysis is among the top programs available in the world for this type of detailed computer flow modelling work. Over the past 8 years, Vaughan Co. has evaluated well over 1000 different wastewater, sludge and bio-solids systems for use with its products. All Rotamix mixing system designs are supported by CFD analysis, either by standard modelled geometries, or using customised models individualised to meet specific application parameters on a consultation basis. 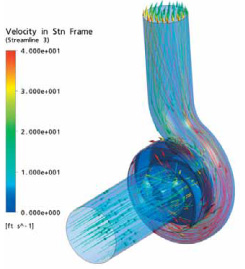 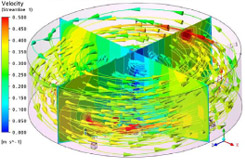 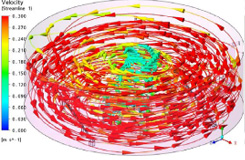 Pathline plots illustrate the path of flow for a particle starting at any given point. The plotted path shows the actual movement of the particle around the tank, confirming both horizontal and vertical movement within the mixing pattern. Pathline plots are useful for showing particle movement in a tank that has reached steady state (a period of time determined to ready a steady state of mixing with a tank) and can also be used to show the re-suspension of a particle from a point on the tank floor.

Rotamix nozzles are strategically aimed to spread mixing energy to all regions and levels of the tank. Isosurface plots can be used to illustrate the effect of the high velocity Rotamix nozzle plumes as they drive tank mixing. Isosurface plots are often also used to assess tracer washout simulation results by focusing on specific areas of concentration inside the tank after a given period of mixing time. 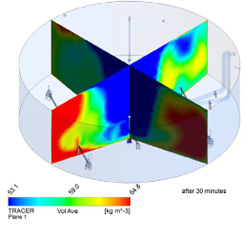 In addition to all of the standard CFD simulations available for Rotamix, Vaughan Co. has also developed the unique capability of being able to generate lithium chloride tracer washout test simulations using their software. Tracer washout testing can be an expensive and time consuming method of performance testing in the field. Vaughan Co.’s computer models have proven to be over 97% accurate when evaluated against actual field test results, providing additional peace of mind to the customer that they are receiving the best and most effective mixing solution for their process.

Rectangular tanks usually require additional mixing energy depending on the sludge rheology in each application.

In spite of their volume and height, egg-shaped digesters can be very effectively mixed across all levels by Rotamix. 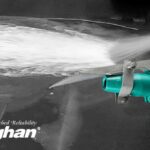 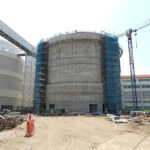 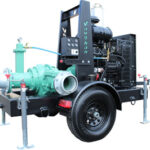